Serverless computing is a hot topic. Especially AWS Lambda is gaining traction. It is being used as the foundation of Amazon’s Alexa product-line and the basis of entire web sites like A Cloud Guru. We can rapidly build and release new business value to our customers like never before.

That said, we still want to deploy working solutions even at high velocity. Our production releases should be of the highest quality and should not endanger any users or depending systems.

Typically we apply techniques like Canary Releases and Blue Green Deployments to reduce the risk of going into production and to be able to easily rollback any broken solutions.

In this short post, I want to introduce you to AWS Lambda traffic shifting. This rather new feature allows us to do Canary Releases and Blue-Green Deployments in a Serverless world. I will show you, how to use this to roll out new features in a controlled fashion and how to roll back to a safe point if things go wrong.

If you need a quick refresher on AWS Lambda, please look at a previous post.

Before we dive into AWS Lambda traffic shifting, we need to refresh our understanding of Blue Green Deployments and Canary Releases.

When we deploy our solutions to production or update an existing solution, we want to keep downtime at a minimum. In today’s world being down for 4 hours of maintenance is simply no viable option anymore.

Blue-Green Deployments can help us here. Consider the following illustration.

Canary Releases are similar to Blue-Green Deployments. They try to reduce the risk of deploying new versions by slowly rolling out the update to a reduced set of users. You could start by directing 10% of incoming traffic to the new Green Release and stepwise increase that percentage until you reach 100%. At that point, you can decommission the Blue Release.

Before we can continue our discussion of Blue-Green Deployments and Canaries, we need to look at the exact way, AWS Lambda handles our functions.

Whenever you upload your code to AWS Lambda, AWS stores your code in a S3 bucket. Let’s check this using a simple Hello-World Lambda:

We create the Lambda function using the command line. First, create the Zip-file containing the code.

Then create the function called TrafficShiftDemo. Note that I refer to a role-arn using $ROLE_ARN, see my previous post if you need help with this…and I have truncated all arns to keep things readable.

The point I want to stress is the "Version": "$LATEST" field. As the name suggests, $LATEST points to the very latest version.

Contrast this to publishing a Lambda function. First, delete the function again.

Then re-create and publish the function using the command-line argument --publish.

Instead of $LATEST, the function features a version of 1. A published function is essentially an immutable snapshot of the function code and its configuration, such as environment variables.

We publish a Lambda function trice. Version 1, version 2 and version 3 are identifiable by their respective version numbers. The $LATEST version always points to the most recent version uploaded to AWS Lambda.

And now we publish this new code, by updating the Lambda function (don’t forget to Zip the code):

Now AWS Lambda informs us, that version 2 has been created.

If we examine the function, AWS Lambda lists all versions. I use JQ to extract the function arn.

You can see the so-called fully qualified name of the function. And we can use that name to invoke the different versions.

Cloudwatch reports which version was used, too:

As I said above, a published function is an immutable snapshot. That also implies that version numbers are not reused. If, for example, you remove version 2 of the function and publish the function again, then you end up with version 3. Version 2 will never be reused.

An alias allows us to refer to a specific version of an AWS Lambda function by name. Think of it as a simple logical link, similar to what you would do on a standard *nix-like file system.

Let’s create an alias called HELLO for version 1 of our Hello-World Lambda.

If we invoke the alias, we get our Hello World response, as expected:

AWS Lambda tells us, that we invoked version 1: "ExecutedVersion": "1", just as we wanted.

Now point the alias to the updated french function code:

If we invoke the alias again, we get the french response:

With this we can have a stable client, that only ever calls our alias and we can safely replace the version behind the curtains without ever touching the client.

Consider the example of an Alexa skill that refers to an AWS Lambda alias, without actually knowing which exact version was used. The Alexa skill refers only to the PROD Lambda alias. This in turn aliases version 1 of the actual Lambda function. 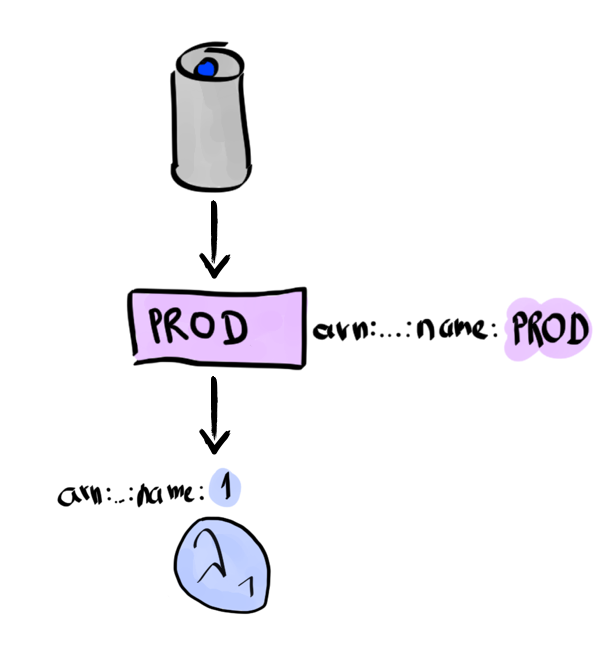 After an upgrade to a new version 2 and testing that it works as expected, we update the alias to point to version 2. The Alexa skill need not be updated in any way. 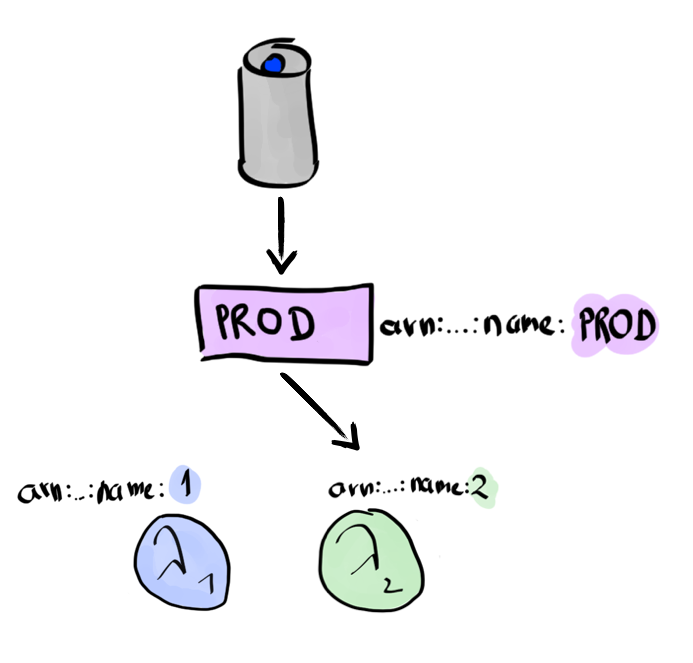 This is all very nice, but how can we ensure, that people like our new Lambda function and that it behaves as expected? This brings us to Canary Releases with traffic shifting.

Traffic shifting is the idea to release an update step-wise in parallel to the current version.

Let’s assume we have a Lambda function 1 in production. Now we want to release version 2 but we want to roll out the new version in a safe way.

Traffic shifting to the rescue.

AWS Lambda aliases now support this feature out of the box. We just have to use the new command-line argument --routing-config. Before continuing, check the version of your AWS CLI tool, as this is a rather new addition to AWS Lambda. It should read as follows:

First of all, delete the HELLO alias that was created above:

Now create a new alias, that redirects 70% of incoming traffic to version 1 and the remaining 30% to version 2.

The --routing-config AdditionalVersionWeights={'1'=0.7} tells AWS Lambda to redirect 70% of the traffic to version 1, instead of using version 2. You can verify this behavior by invoking the function multiple times checking the "ExecutedVersion" in the response.

We can finally release new Lambda functions and check their behavior and impact in a truly agile way.

Traffic shifting is an important part of Blue-Green Deployments and Canary releases. With this new feature, we can release new business functions and see how people are using it and how the market reacts to it. Think of simple things like testing if people like seeing more details about a movie on a streaming service instead of just the title and the running time.

If you want to dig deeper into this topic, I urge you to look at AWS Codedeploy which automates rolling-updates and rollbacks even further. With Codedeploy you can configure your Lambda to scale up to the new version with a rate of 10% every 5 min, for example.

In a follow-up, I will cover an integrated example, that brings Lambda, traffic shifting, Codedeploy, and the Serverless Application Model together into a truly serverless continuous delivery pipeline.